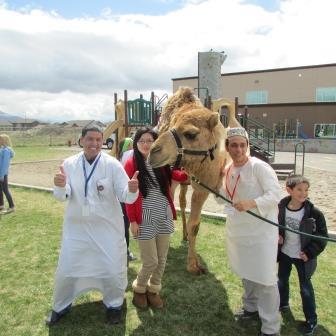 Stacy Lyon, a mentor teacher for TCLP participant Munir Gomaa at Renaissance Academy in Lehi, UT received a CLP grant to host a Bedouin Fair for the school community to kick off their annual “World Language Week” for 2013. Through the support of the grant, the school set up a fair with a live camel, Arabic music, potted palms, bread baking, belly dancing, and booths with activities led in Arabic.

In addition to being open to all community members, Arabic speakers from a nearby charter school that works with many refugees were invited to take part in the festivities and interact with the rest of the community. This provided an opportunity for Renaissance students to practice their Arabic with heritage and native Arabic speakers and get to know exchange students in the area.

The Bedouin fair aimed to increase interest in Arabic language at Renaissance Academy through engagement in authentic, interactive activities. The 2013 event was one of the most successful that the World Language Team had conducted over the past few years with double the average attendance equaling about 500 participants including 60 volunteers from 4 other high schools, PAX, and BYU.