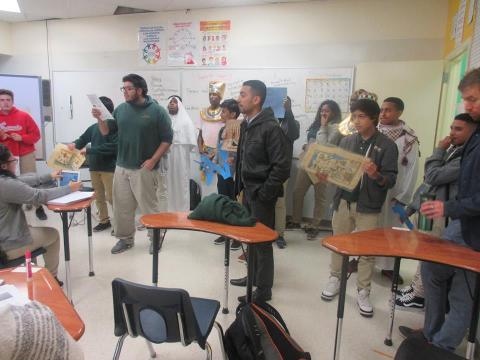 Mr. El-Dwiny, along with the faculty and staff at John W. Lavelle Preparatory Charter School, will host an international festival with an emphasis on the Arabic world. Mr. El-Dwiny plans for the festival to provide cross-cultural outreach to students, parents, the community, principals from other schools and local media. He and his students will organize exhibitions on Arabic culture and history, a fashion show of Arabic clothes, music, and videos showing Arabic and Middle East culture. There will also be talks on the importance of studying Arabic from the principals of the school, his mentor teacher, himself and his Arabic students. The festival will include Arabic food, writings in Arabic for the audience, and other activities. The Arabic students will perform a play in Arabic as well as sing songs in Arabic. They will teach other students Arabic vocabulary during the day.

Mr. El-Dwiny’s Arabic students will also take part in an innovative effort to engage students a Lavelle with Arabic culture through popular Arabic music. Prior to the festival event, the Arabic students will study the music of the Middle East with the world renowned New York Arabic Orchestra. Over the span of six weeks, music teachers will work with the students, strengthening their Arab language skills through lessons on musical instruments and the history of Arab music. Then on the day of the festival, the students will have a recital before their family, friends, and peers. The Arabic International Festival will support the school's goal of bringing awareness about the importance of studying Arabic to the community at large. This project also intends to encourage understanding among diverse cultures and to motivate students to study Arabic as well as to increase the number of the students who want to study Arabic.