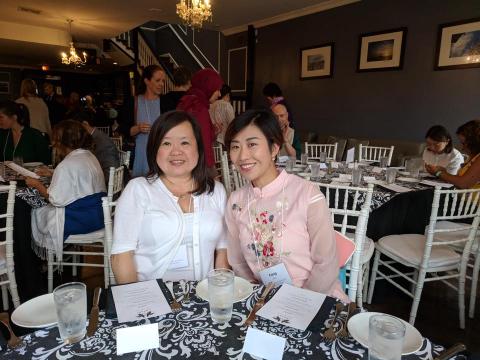 Ivy Yiu received a CLP for “A Taste of China,” which is a unit of study and part of the curriculum for the Mandarin Chinese classes. Students currently enrolled in the school’s Mandarin Chinese class learned about Chinese Tea history, Gongfu Tea Ceremony - how to conduct the tea ceremony, and Chinese tea culture. The culminating learning activity was to show case what students have learned of language and culture at the North Warren Regional Multicultural Fair. Each year, North Warren Regional School hosts a community-wide Multicultural Fair. During this fair, students and community members organize booths and tables to showcase diverse cultural traditions from around the world. "A Taste of China" was a simulation of a traditional Chinese tea house where customers experience Tea Ceremony, sample teas and light foods while enjoying the finer aesthetics of Chinese culture like calligraphy writing, painting, and Chinese music. Student facilitators were responsible for overseeing three activities at the "Taste of China" booth.