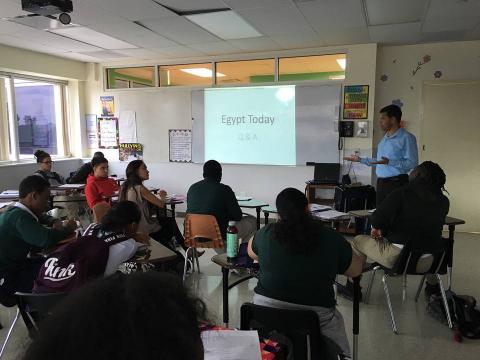 Adel Ghattas (2017-18) received a CLP grant to conduct a project designed to introduce his students to the history of the Middle East through a rich artistic context, engaging them with the language and culture in a fun way. Mr. Ghattas worked with the global history teacher at his school to prepare and present on the Arab-Israeli conflict. After students had learned about the historical and cultural background, they watched the movie The Band's Visit and participated in classroom activities that explored the movie's characters and themes. (The Band's Visit tells the story of an Egyptian Police Marching Band that becomes lost in Sinai and ends up in a remote town in Israel. There, they are hosted by an Israeli woman and spend the night with other Israelis. The film explores the tension that arises from the political conflict, as well as the human connections that form when individuals meet one other.) 34 students then attended a live performance of the musical on Broadway at the Barrymore Theater and ate at a Moroccan restaurant in New York City. The students who participated in the field trip then reflected on their experience and what they had learned through the project. They also prepared posters and presented about the musical to teachers, parents and colleagues at Lavelle's International Day, extending the impact of the project to include the wider community.