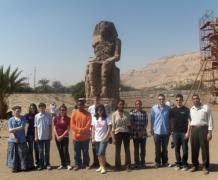 • Mentor teacher Emad Eldigwy and TCLP Arabic teacher Hossam Sarhan at The Center for Global Studies in Norwalk, CT created a multifaceted project which included a field trip for 50 students to the Metropolitan Museum of Art to see the ancient Egyptian exhibit and follow-up activities to be used during an Arabic Class Fair. During the Fair, 130 middle school students from other schools were introduced to Egyptian culture, clothes, and cooking as facilitated by 50 current Arabic students. As part of their goal to increase Arabic language interest and awareness, Arabic class projects were be displayed and presented to the visitors. The event was also covered by the local news, increasing the awareness of the event and the Arabic language program at CGS to the entire community. A CD with Arabic highlights was created containing events from throughout the year, and disseminated to schools in Norwalk to increase interest and excitement about learning Arabic.