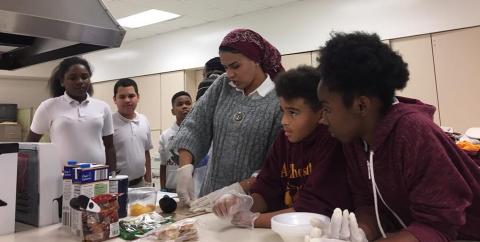 Passant Aly (2017-2018) organized an Arabic Club in which participants got the chance to learn communicative Arabic and experience Arabic culture. The club met at Anne Chesnutt Middle School once every week, for eight weeks. Each week there was a different theme. For example, the first week focused on language and traditions and the second week students explored food and festivals. For each theme participants learned through doing: they cooked, performed dances, learned Arabic letters, and much more. Arabic Club members also went on field trips and virtual tours of Egypt as well. They kept a passport in which they jot down all they learned.

At the end of the eight weeks, club members hosted an Arabic Night event, in which members from the community and other schools were invited. The Arabic Club performed the dances they learned and gave presentations about the cultural aspects they experienced. Authentic Arabic food was served to guests. The night helped promote and show the impact of the Arabic program at Anne Chesnutt.