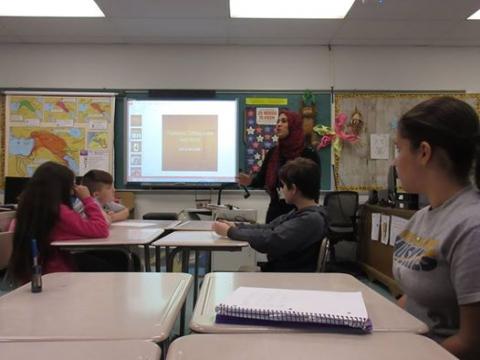 Ms. Hamed will organize activities at Highland Middle School around the story of Aladdin using a comparison of eastern and western interpretations in order to build cultural awareness and mutual understanding. As part of the activities she will lead a field trip for students to the Broadway show of Aladdin in New York City. After watching this interpretation of the story, students will watch a movie representing the eastern version of the story. Students will write a review on the show and movie both in Arabic and in English. Students will sit together and decide what part of the story they will act to show the differences between the two versions.

The students will act the scene out for parents at an event called Aladdin Night. This event will be designed to introduce more information about Middle Eastern culture, customs, and food. Students will also design advertisements for the event. They will serve food and tell parents about the different traditional ingredients. Ms. Hamed has developed this project to increase the knowledge and awareness of Arabic cultures and customs, as well as to increase support and enthusiasm for the Arabic program at Highland.