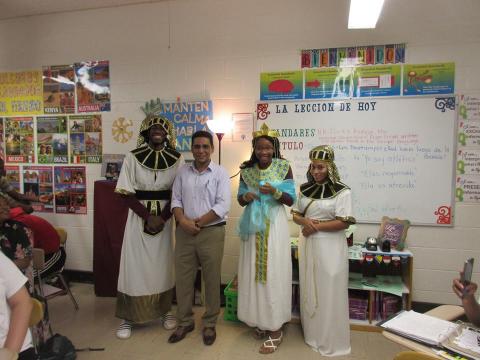 Mohamed Etify received a CLP grant for his host school’s Arabic language and culture club, the Horus Club. The project supported activities that enriched the students’ knowledge about the target language and culture. Some of these activities included virtual exchanges with another Arabic class in the district, a visit to a local Egyptian restaurant where the 16 language club students ordered food in Arabic, a visit to an Egyptian exhibit at the North Carolina Museum of Art, and a school-wide Arabic festival including dance performances with Arabic music and costumes and Arabic arts such as calligraphy. Over xxx students and community members benefited from the activities and festival supported by this project.

Over 300 people benefited directly from the project by either taking part in the field trips or the last day of the activities. In addition, the 16 Arabic club members and the regular Arabic students who attended the virtual meetings for a total of 30 students benefited from the project. gram. The project not only spread awareness of the Arabic program and the importance of learning Arabic at Anne Chesnutt Middle but also at the partner school with which Mohamed Etify worked.