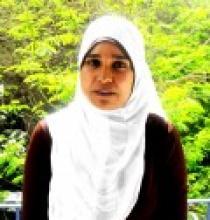 TCLP Egyptian exchange teacher Abla Rasslan was approved for a 3-part Arabic cultural project. The first part consisted of current H.L. Harshman Middle School students teaching other feeder school students about Arabic language and culture. The second part was the creation of an “Encyclopedia Arabia” in which 15 schools contributed projects for inclusion on topics ranging from tourist attractions, to the economy and government of the Arab world. The final part was a culminating Arabic fair, which showcased student work in Arabic class and a fashion show. More than 200 students were involved in this successful project, and when Abla returns to teaching in Egypt, she plans to do a similar project on the U.S.