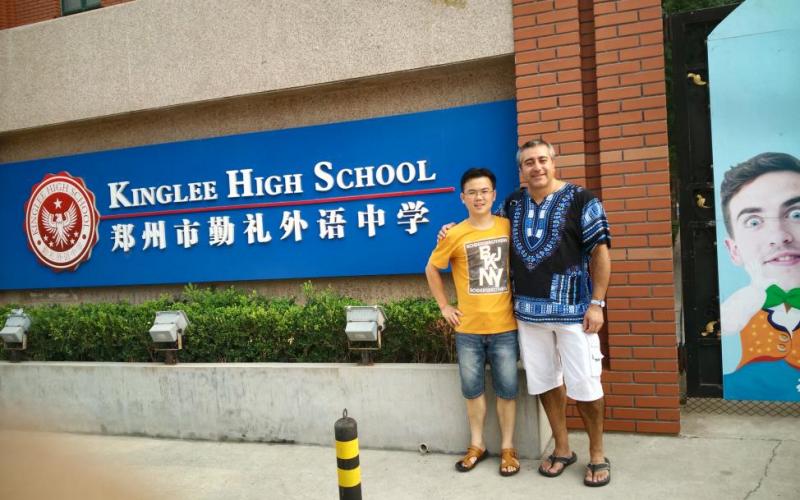 From 2010 to 2011, Zhu Qingpeng participated in the State Department’s Teachers of Critical Languages Program, which brings teachers from China and Egypt to teach Mandarin and Arabic in U.S. elementary and secondary schools for an academic year. Mr. Zhu worked in Mountain Range High School, Westminster, Denver, Colorado, where he taught Mandarin to a group of about 60 students. Mr. Zhu had a wonderful and successful year in teaching Mandarin to the kids and organizing all kinds of culture-related activities for the students and the local community as well. His work has received praise from the students and the school administration as well. It was in Mountain Range that Mr. Zhu met his then mentor, Guillermo Cantarutti, and they developed a profound friendship. Mr. Cantarutti was then Head of the World Language Department of Mountain Range High School, during that period of time, Mr. Cantarutti developed a deep interest in Chinese culture and the Chinese language, partly because of his unfailing interest and talent in learning new languages. In the summer of 2012, Mr. Cantarutti went to visit Zhu in China, where they spent about a month travelling across the country. Mr. Cantarutti had an idea of going to work in China and he had been applying for a job since then. Finally in the year of 2015, Mr. Cantarutti got the confirmation from Kinglee High School in Zhengzhou, Henan province that he had been offered a job position. Mr. Zhu was thrilled to hear the news and he paid his mentor a visit in Zhengzhou in the past summer vacation. They went to the world-famous tourist site Shaolin Temple and they had a wonderful time there.