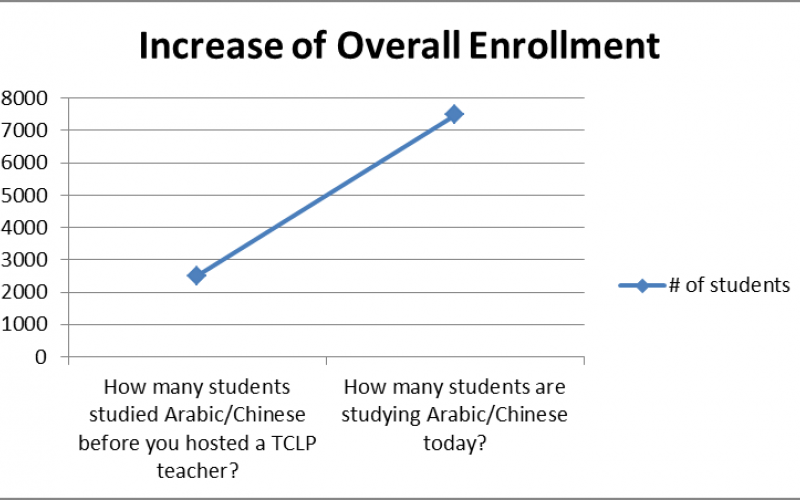 The survey results showed impressive findings. There was close to a 300% increase in overall enrollment from the 38 schools that responded to the survey. Fourteen schools hired a full time teacher. Nine schools helped other schools in the area start Arabic/Chinese language programs. The majority of the alumni, either mentor teachers or administrators, have had contact with their exchange teacher more than once since they returned to their home countries.
Respondents from the survey were also asked about the impact TCLP had on their students. The comments were overwhelmingly positive. One person said that “Both of the teachers we received from TCLP were top-notch. They built excitement for the Chinese program and also became active members in our community, which helped to build support for the program outside the school.” Other school representatives shared that their students are going to study the language in college and opened the door for studying abroad after acquiring foundational Arabic and Chinese language skills from TCLP teachers. Multiple respondents explained that their students understanding of people around the world deepened and students and faculty became more empathetic to those who come from a different background.
Evidently, TCLP makes a difference in schools and communities around the United States. Staff love to hear success stories. If you would like to share your school’s story, please send us an email or look out for the next alumni survey!