My capstone project aims at giving my school and community the opportunity to enjoy a variety of authentic cultural experiences. It also seeks ways to sustain Arabic learning through a series of video conferences with students and guest speakers from different places particularly Arabic speaking countries. In this respect, my students and the members of my community have had the chance to :
- interact with students from 6 schools in Morocco : they discussed issues related to Education, life style, food, music, traditions....
- Speak to three guests speakers who shared with them many interesting cultural aspects particularly living in Morocco as expatriates ( Ms.Lena, Ms Jeannette and Mr.Khalid )
- Watched more than 50 videos about Moroccan food, music, architecture, history ....
- tasted a variety of Moroccan cuisine .
- Tried out Moroccan traditional garments.
-Invited to visit and eat in Moroccan restaurants in Sacramento such as Casablanca and Khasbah.
The last part of my multi-layer project is a special art project( a giant puzzle as my students call it ).
A tiger’s head ( the school symbol) in a form of mosaic.
It is comprised of over 60 world languages ( hello and welcome phrases engraved on Khamsah ) particularly Arabic . I started work on the project in January, and It will be revealed either in the last week of April or May since it requires tons of hours. We also want to give more time to parents to buy the ' Khamsah".
The project will be displayed on the school yard with a sign showing ' Teachers of Critical Languages logo and other participants'. In April 24th, I am giving a cooking class at a public library and it is an occasion to sustain the Arabic program in my community. Most importantly, I am going to put a table and distribute flyers in April 26th during the International fair in my school .
The first week of June, I am going to furnish a corner at our school library with books in Arabic and other resources.Finally, when I return home, I will make many short videos and make them available to my school to assist the students in learning Arabic.
Please see the attached documents for more information about the mosaic .
PS: There is still about 15% of work to be done to finish the ' giant' mosaic.

What is Khamsah?
Hamsa

The hamsa (Arabic: خمسة‎ khamsah, meaning lit. “five”) is a palm-shaped amulet popular throughout the Middle East and North Africa, and commonly used in jewelry and wall hangings. Depicting the open right hand, an image recognized and used as a sign of protection in many societies throughout history, the hamsa is believed to provide defense against the evil eye. The symbol predates Judaism, Christianity and Islam.

In Islam, it is also known as the hand of Fatima, so named to commemorate Muhammad’s daughter Fatima Zahra (c. 605 or 615 – 633). Levantine Christians call it the hand of Mary, for the Virgin Mary. Jews refer to it as the hand of Miriam in remembrance of the biblical Miriam, sister of Moses and Aaron.

Some say that in Islamic tradition the five fingers represent the Five Pillars of Islam. In Old-Turkish this sign is called: ‘pence-i al-i aba’, with ‘pence’ meaning ‘hand’ or ‘five’, referring to the household of the Islamic prophet Muhammed. The household of Muhammed is enumerated as those five people over whom the prophet held a cloth; they are: Fatima-tül Zehra, Ali-el Mürteza, Hasan-ül Mücteba, Hüseyin-i Desht-i Kerbela, Muhammed Mustafa.
https://thesevenworlds.wordpress.com/2014/09/28/hand-of-fatima/ 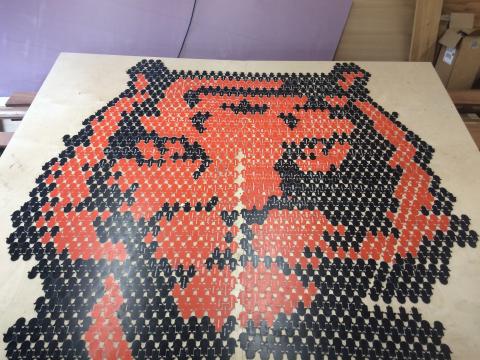