Most People in the valley do not know anything about the TCLP or the Arabic class.
I had a year long plan to showcase the program and the Arabic language and culture to everyone in the valley. Accordingly, I followed a plan that included many actions and events:
First, I created collaborative classes with other teachers to raise awareness for students at my school. So, I planned different outreaches:
1- An outreach with Cosmetology teacher in which I introduced the history of cosmetics in Egypt.
2- An outreach with the forensic science teacher on the mummification process in ancient Egypt.
3- Two outreaches in the library that introduced The Hijri year and the Tanura Dance tradition.
4- An outreach teaching students the origin of papyrus and how it was made in ancient Egypt.
5- A cooking event in which I collaborated with the food science teacher and taught students how to cook two different Arabian dishes. The event included a fashion show in which the students displayed traditional Egyptian clothing. It also included a belly dance show and the school orchestra played an Arabian piece of music.
6- My extended outreach that was a series of presentations in Spanish classes to introduce the similarities between ancient Egypt and ancient Mexico. Also, they could identify the similarities between Arabic and Spanish Languages.
Other outreaches were held at different classes for the sake of raising the awareness of studying new Arabic language and learning about different cultures.

Secondly: I created the Arabic Club in which I ran different events for people from the community. In my club, I introduced the program, the culture and the Arabic language.It was for other members in the community. I planed to make it for all people, students or parents or others. This Club reached people outside school. Meetings were held in different places every time. Some students helped me with it. I introduced sessions about Arabic Language and Egyptian culture. some topics included: food, clothing, history, inventions and other topics related to Arab and Egyptian Culture.
Thirdly: I conducted a series of school visits to introduce the program to students from other feeder schools. It included visits to high, middle and lower schools.
Fourthly: I get my class involved in two projects: A museum at the end of the fist semester, and a display during the second semester. Both projects enabled all of the school students and teachers to explore the history and culture of Egypt.
I was planning through the Arabic club to raise awareness and advertise the program. 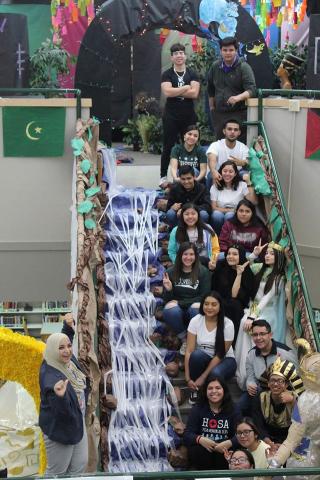