February 2022 is the most memorable month for all the Chinese people because traditional festivals such as the Spring Festival, the Lantern Festival and also the grand worldwide sporting event, the Olympic Games, took place successively this month this year. And also in March when the district would have their spring break then, the traditional Tree-Planting Day would fall on that day. When hearing the Olympic Theme Song Together for a Shared Future, I had an idea of filming a video about the song with all the elements about the Spring Festival, the Lantern Festival, the Olympic Games and Tree-Planting Day inside. After communicating with my mentor and my colleague who is a choir teacher, we began to co-work for a whole month for the video with Chinese and Choir club students. In my class and my Chinese club, my students and I did the following things. Firstly, we made tiger lanterns because 2022 is the year of the tiger. We cut out some cards , wrote down some riddles on them and stuck the cards below the lanterns. Secondly, we made some glutenous rice balls in the school cafeteria because they are the traditional food during the Lantern Festival and presented them to school staff. After finishing the riddle tiger lanterns and the glutenous rice balls, we began to decorate our school lobby with the permission of our principal with the lanterns and announced all the students to enjoy the lanterns and guess the riddles below them to win gifts. After these projects, we began to make Tree-Planting Day, also called Arbor Day here flyer to notify everyone to protect our environment and draw Olympic mascots. At the same time, after school every day, students from Chinese and Choir clubs, five teachers including me practiced the theme song in Mandarin for half an hour or sometimes longer. After three weeks’ practice, we finally finished filming all the small videos. We spent the whole last week of February to edit it before publishing it to the public! It got an immediate success! 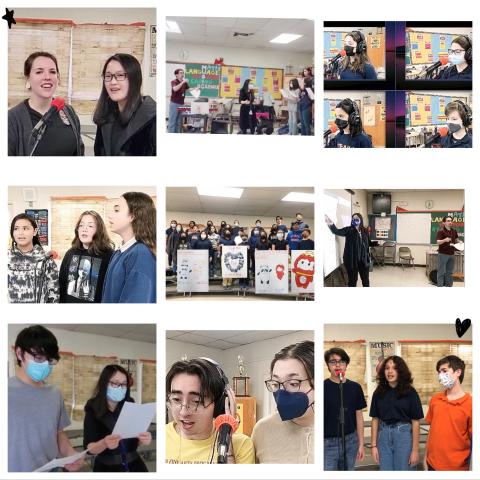